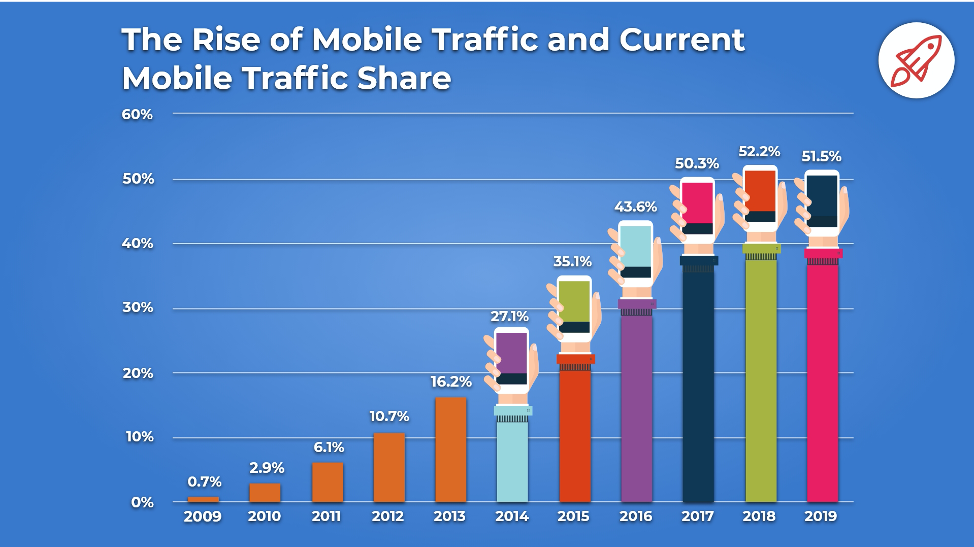 Each year the internet grows and 2020 will be no different.

From social media to video consumption, search terms, and ecommerce, you can do just about anything online.

With this post, we’ve compiled the most relevant 2020 internet statistics to serve as a reference for information, projects, blog posts, and more, about all of those topics above.

We hope you find this information useful and we will continue to update this post as statistics become outdated, updated, or changed.

 With a current world estimated population of 7.8 billion, there are approximately 4.79 billion people worldwide who have access to and use the internet frequently. That means that 61.4% of the world population uses the internet.

 89.4% of America and 87.7% of Europe has access to and uses the internet on a daily basis. Both regions have some of the highest internet penetration rates.

 There are currently 351.8 million registered domain names in the world.

 35% of all websites are using WordPress as their content management system. That’s over 60 million websites.

 In 2019, 51.5% of all traffic worldwide was conducted on mobile phone devices. This is slightly lower than the year before, suggesting the trend will settle at around 50 percent of traffic coming from mobile.

 In 2009, just 0.7% of internet traffic worldwide was from mobile devices.

 64.92% of people browsing the internet are using Google Chrome as their main browser.

 15.97% of people browsing the internet are using Safari to do it

 4.33% of internet users choose Firefox as their main browser

 As compared to 2018, Google and YouTube remained in the same positions. But Facebook fell from the #3 spot to #4 while Tmall (8th in 2018) and Sohu (not in top 10 in 2018) both jumped up in the rankings. Four of the sites on this list are exclusive to China, demonstrating the strength of this market.

 Blogger is the largest blogging platform with over 46 million monthly active users. The majority of bloggers are women.

 Every second that a customer has to wait to load a web page increases their likelihood of clicking out. Research shows that as load times go from 1 second to 3 seconds, the likelihood of this occurring increases by 32%. If a page takes 10 seconds to load, the probability increases to 123%.

 The average speed of websites in every industry in the United States is 5-6 seconds. But, the best practice according to Google is 3 seconds.

 YouTube was the number one downloaded app globally in 2019.

 66% of monthly active users on Facebook come back to the platform every day. 74% of American users are found on the platform daily, too.

 The average session duration on Facebook is between 10 and 12 minutes.

 Facebook isn’t just for connecting with friends and family or using Messenger. In fact, 78% of users have used the platform to find new products and services. And, Facebook is the most popular marketing platform of any social media channel for both B2B and B2C businesses.

 80% of people using Instagram are outside of the United States.

 34% of users are Instagram are in the “Millennial” generation category.

 25% of smartphone users have the Instagram application installed on their device.

 38% of all Instagram users will check their application more than once per day.

 In a single day on Instagram, 4.2 billion pictures are “liked.” To add to that, there are nearly 100 million new pictures/posts created on Instagram every single day, and 400 million more stories posted. Story feature usage has increased by 100 million posts since 2017.

 45% of people globally watch an hour or more of online video content every single day.

 50% of people between the ages of 18 and 34 would drop their current task to watch a new YouTube video from a channel they subscribe to.

 40% of Millennials report trusting YouTube for high-quality content. 60% of them stated that videos on the platform have impacted their personality and worldview.

 Video is an important part of the buying journey for consumers in the modern world. 50% of people on the internet watch videos and product demos before purchasing anything.

 Videos that go over two minutes in length tend to see significant drop-offs in user retention. But, if someone watches more than six minutes of your video, they are likely to stay for the entirety of it.

 90% of video views on Twitter are done through their mobile app.

 Google accounts for 87.96 percent of the global search engine market. The rest is divided amongst Bing, Ask, and DuckDuckGo

 In 1999, Google crawlers took an entire month to index 50 million website pages. In 2012, the same task was accomplished in under 60 seconds.

 By 2021, mobile ecommerce sales will account for 72.9% of all online purchases, totaling 3.56 trillion dollars.

 Currently, 1 in 4 dollars of ecommerce spending is spent on mobile devices. Toys and hobbies were the number one item categories of purchase. Second was video games, consoles, and accessories.

 Amazon is the number one ecommerce retailer in the United States, accounting for 49.1% of all online shopping. Next, is eBay with 6.6%, followed by Apple, Walmart, The Home Depot, and Best Buy.

Conclusion
The internet and technologies are constantly changing.

Be sure to check back for more as we keep updating this ultimate list of internet statistics and feel free to use them in your own writing, blogs, websites, and more.